The recovery community wants its voice to be heard 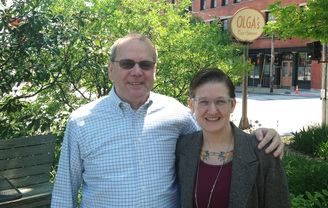 PROVIDENCE – Monica Smith, the new executive director at RICARES, the Rhode Island Communities for Addiction Recovery Efforts, newly arrived from Oregon, admits that she is still learning how best to navigate her way around the policy labyrinths of Rhode Island – and how to properly pronounce the names of towns and cities.

In turn, what she brings to the conversation is a fresh perspective on the dynamics of the recovery movement, one that places an emphasis on building relationships.

Before coming to Rhode Island, Smith served as operations director at the Portland Homeless Family Solutions in Oregon. Her expertise is in developing and implementing processes and programs with a focus of relationships, working with innovative nonprofits. It was her first visit to that hub of innovation and convergence that is Olga’s Cup + Saucer, where Rep. Aaron Regunberg was busy holding back-to-back conversations a few table away in the outdoor patio oasis. Smith and RICARES board member Steve Gumbley, who served as board chair for the national Faces and Voices of Recovery organization from 2008 to 2014, sat down to talk with ConvergenceRI, sketching out their plans and ideas for how to make the recovery community in Rhode Island more visible – and more vocal. “By our silence,” Gumbley explained, “we’ve let other people define us.” There has been a tendency sometimes, he continued, to be too nice, and to not rock the boat. The first step in redefining what it means to be a constituency of consequence, a phrase often voiced by the late Jim Gillen, a leader in the Rhode Island recovery community efforts, is to engage with the recovery community itself in a series of focus groups, to ask them to say what they want to do, according to Smith. The first focus group will take place in Newport on May 26 at CODAC, she said.

[Both Gumbley and Smith turned the tables on ConvergenceRI, asking for a definition of what the phrase “constituency of consequence” meant to the reporter.]

Reducing harm
Another strategy that Smith wants the recovery community and the Governor’s Task Force to discuss and grapple with is harm reduction. One idea to talk about, Smith continued, is whether or not to create a safe space in Rhode Island for illicit drug users to test for the presence of fentanyl, similar to the pilot program to test illicit drugs at Vancouver, British Columbia’s supervised-injection site. Vancouver Coastal Health began offering its Insite clients fentanyl test strips in July of 2016, enabling them to find out, within a minute, whether there is fentanyl in the drug they are about to inject, according to CBC News. As a result, clients are 25 times less likely to overdose, according to Mark Lysyshyn, a medical health office with Vancouver Coastal Health, according to a May 15 story by reporter Matt Meuse. About 80 percent of the samples tested positive for fentanyl, according Lysyshyn. The limitations of the inexpensive test strip, which cost about $1, were that they currently test for the presence of fentanyl but not the amount. The strips are also not able to test for the presence of fentanyl analogues, such as carfentanil, many times more potent than fentanyl.

Lysyshyn told Meuse that the next steps for his team at Vancouver Coastal Health include getting more people to test their drugs before consumption, and to work with the strip vendor to improve the test for fentanyl analogues. Lysyshyn also said that they are exploring the possibility of using the testing strips outside of the safe injection site, in coordination with the health authority’s take-home naloxone program.

How to have that discussion?
For Smith and Gumbley, the challenge is how to have that discussion – both within the Governor’s Task Force and as part of a larger public dialogue.
If law enforcement is using a similar detection strip to determine the presence of fentanyl, good enough to use in a court of law, why not make that testing strip available? If the number-one goal is to save lives and prevent overdoses, wouldn’t access to a way to test for fentanyl make sense, from a public health perspective?

In 2016, there were 336 confirmed overdose deaths, with 195, more than 50 percent, involving fentanyl, according to the R.I. Department of Health. The goal that Gov. Gina Raimondo pledged – to reduce the number of overdose deaths by one-third, to 172 by 2018 [working from the 2015 numbers of 258 deaths when the pledge was made] – is unlikely to happen without a major change in strategy.

Not an either-or choice
Smith and Gumbley said it would be a mistake to get distracted by current argument around the value of medication-assisted that the new federal director of Health and Human Services, Dr. Tom Price, has questioned. The emphasis should be on recovery, a long-term effort, and not just on medication-assisted treatment. As Smith told ConvergenceRI, recovery is all about building relationships, in creating an engaged community of support. [Both Smith and Gumbley are in what they describe as long-term recovery.]

Moving forward
Gumbley pointed out what he called the lack of attention to alcohol-related use disorders as part of the larger conversation about substance use. Smith said that she wanted to focus more on they way that trauma affects decision-making and risk-taking. Both had questions about the limits of a clinical model in prevention. Gumbley pointed to the success of Act Up, a group that used political protest as a way to dramatize the need for better treatment and research around AIDS and HIV in the 1990s, as perhaps one model that RICARES may consider the future. Stay tuned.